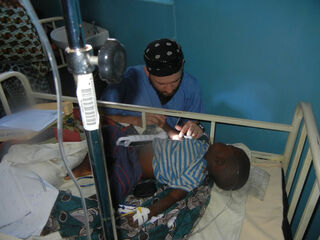 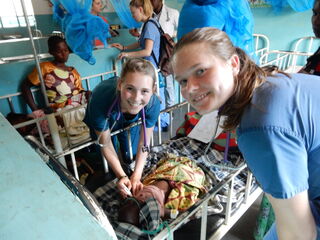 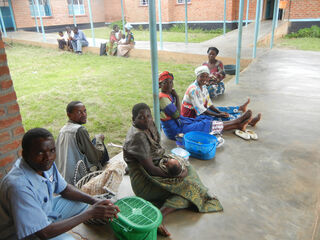 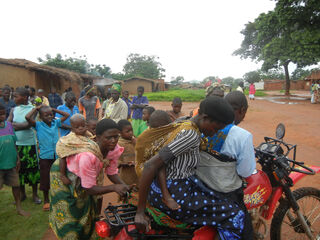 Malaria in Sub-Saharan Africa is a big killer of children < 5yrs old as well as pregnant women. It is a disease caused by infection with a protozoan of the Plasmodium genus. By far the most deadly species, Plasmodium falciparum, is all too common in Malawi. The Plasmodium protozoan is transmitted to humans by the bite of a female Anopheles mosquito. Malaria kills by causing profound anemia (the protozaons literally eat red blood cells) and by interfering with microcirculation, thus causing organ dysfunction, especially in the central nervous system. Although relatively easy to treat in its early stages, it can progress rapidly and kill within a few days if left untreated.
Access to care is limited in rural Malawi (there is no 911 and there are very few vehicles). Hospitals provide medical care but only that; family members must come to the hospital and stay to feed and otherwise care for their sick relatives, significantly reducing the ability to care for the farm and the remaining family . As a result, a poor subsistence farming couple is likely to put off going to the hospital until a child is very ill; unfortunately, between 1/3-2/3 of such children with severe malaria will die regardless of the treatment instituted at the hospital on arrival.

We at BTM have seen far too many tragic child deaths from falciparum malaria at St. Andrews Hospital, despite our best efforts to augment the work of the hospital staff. As a result, we realized that the best way to deal with this horrible disease is to prevent it. In consultation with Peter Minjale, Medical Director at St. Andrews, BTM embarked on an aggressive program of Indoor Residual Spraying (IRS)in 2014.
IRS is the preventive measure recommended by the WHO and the government of Malawi. It involves the spraying of a long acting insecticide, alpha cypermethrin, on the inside walls of dwellings and outbuildings twice a year. This insecticide kills mosquitoes when they land on the treated wall after a human blood meal. Since the mosquito is the carrier of the malaria protozoan, the disease cannot be transmitted from person to person if the insect dies.

UPDATE Jan 2019:  IRS proved to be a very effective way to prevent malaria in the area where we work until 2018, when the mosquitos developed resistance to the insecticide we were using.  Unfortunately, the replacement insecticide recommended by the government of Malawi and the WHO costs 7 times more than what we had been using.  This would have brought our annual costs from about $32,000/yr to about $230,000/yr.  This amount of money is far beyond our financial capability at this time, which was terribly distressing to us, since we feared that our efforts to eradicate malaria form the area would prove in vain.  However, just in time, the government of Malawi made a decision and found the funds to provide an insect repellant impregnated net to every 2 people in the country.  Such nets have been shown to decrease the malaria rate around 55% in villages where such nets are used.  According to Peter Minjale, head of our Malawi NGO partner, K2TASO,  said that this program should be in the process of implementation in the Kasungu East District as of Jan 2019.  We will therefore cease any further IRS and concentrate on other measures to fight malaria.

Indoor Residual Spraying to fight Malaria in the villages. 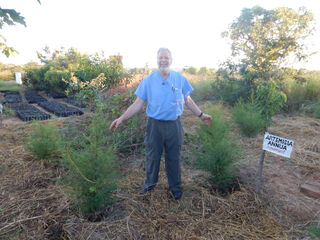 Our latest anti-malarial initiative is the planting of Artemisia annua, whose leaves have about 20 different compounds with anti-malarial properties.  Tea made from these leaves and consumed weekly has been shown to significantly reduce the malaria rate in several studies.  We have donated the money for purchase of about 1500 plants which will be given to individual farmers but also planted in areas held in common by the local villages so that everyone has access to this.

Achievements as of Feb 2020

Peter Minjale informs me that in the 10 or so villages we have provided Artemisia to there is almost no malaria!  This includes the village of Makanda, where we did our first IRS treatment all those years ago.  So the preventive tea made for the plant does work!  Unfortunately, malaria is still quite common in the villages where Artemisia has not yet been made available.  We hope to provide another 1500 plants this year.