We have partnered with The Mooncatcher Project. A mooncatcher is a handmade reusable/washable menstrual pad. Girls all over the Developing World miss a lot of school because of menstruation. The school boards tend to be entirely men who choose either white or pale pastel colored skirts for the girls to wear as a school uniform. Many of the girls cannot afford underwear or bleed through what they have. Menstrual pads and tampons are expensive and hard to come by. Most girls will not go to school when they are having their periods, and, as a result, fall farther and farther behind in school and ultimately drop out. The Mooncatcher Project seeks to solve this problem by providing, free of charge, reusable menstrual pads to these girls. The Project is already in Uganda and Kenya and we brought them to Mtunthama, Malawi in April 2017. BTM purchased/donated 3 sewing machines and paid for the founder of the Project and her Ugandan colleague to come to Malawi. They trained local Mtunthama women how to make mooncatchers. These women will be paid a small amount of money to produce a monthly allotment of mooncatchers, following which hey have the use of the sewing machines for their own purposes (especially if they wish to start a small business of their own!) So far, over 300 mooncatchers have been made and given away since we started the program in April.

Dear Brian,
I hope this mail finds you in good health.We are fine too although its too warm here.  May you find the replies to Ellie’s questions on moon catcher progress.This is about the first amount of the set of pads you left behind in April this year.
-So far 300 kits have been distributed at All saints secondary school and  Chikanda community secondary school where  solar i-pads were distributed by Janet and Naomie.
-Jacqueline spent her time  together with the tailors in teaching the girls using the aids which you gave us for teaching.They also received calendars too so that they are able to know what is hapenning like during their ovulation and menstruation days.
-We still have the same step down as it was rechecked in the same shop and that its functional and they said that there could have been more current getting in to the step down than required so we still keep it.
-The new building is not electrified so we are still waiting for electricity
for the old office which we were using the time you were here. The tailors are
progressing well and they are really working hard.So far we have two tailors which you left behind and with the new one summing up to three tailors.
-From the money you left behind we spent abouK316 500.00 according to the exchange rate we used from the first set of pads.The tailors received K300 000.00 as per your advice.
-This program for moon catcher is benefiting alot to the school going girls because  previously there was a high drop out rate for girls in these  schools especially Chikanda Community Secondary School.
-As of our tailors,there is a difference in various developments in their houses since they are becoming empowered.
Lastly on behalf of my fellow workers at K2 TASO ,we are much greatful with this new project at our organisation  and also with much support and encouragement from BTM.Let me assure you that we will keep on working hard so that we reach these needy girls in Kasungu.
Lastly ,we wish you all the best as you are assisting us on this project.
Greetings and stay blessed,
Jacque. 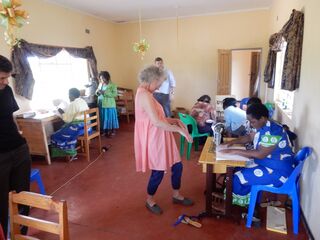 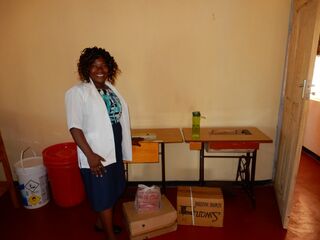